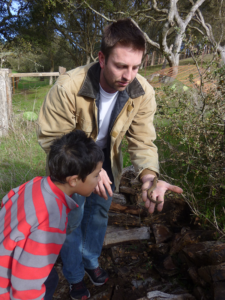 Note: We are no longer offering CircuiTree Camp events.

CircuiTree Camp events were designed  to ignite a child’s passion for nature and science through outdoor nature excursions, hands on group activities that promote collaboration, and science and tech inspired projects! 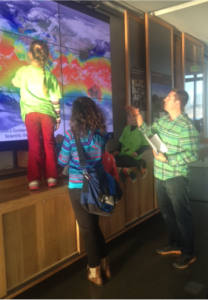 We had a blast at the Exploratorium, sensory overload and all! It was an ideal opportunity to combine science education, outdoor nature education, getting to know new friends and developing teamwork.

On the drive up we learned the new concepts behind the exhibitory via silly trivia questions Nate and Lindsay put together and then explored the new terms like “sediment” and “cartography” in the various exhibits that the teachers chose for the kids to delve into. We completely conquered a few of the coolest exhibits, exploring personal space distances that felt comfortable or uncomfortable, upside down images projected by a unique mirror and the cartography room where the children were fascinated by the multitude of epicenters of earthquakes in our area and how big the Loma Prieta earthquake rippled through as the circles got bigger and bigger and faster and faster over the 3-D map. We also covered a lot of territory, playing with the ingenious hands on activities on the way to our scavenger hunt destinations.

Our new friends were very interested in learning and a delight to have with us. We adults were clearly challenged as to how to guide the children to our “agenda” while they were so enchanted with all the exhibits on their way to and from. We managed to squeeze in some quality discussion and the quieter areas allowed the children to interact and participate more than we had seen in past excursions so we were pleased. 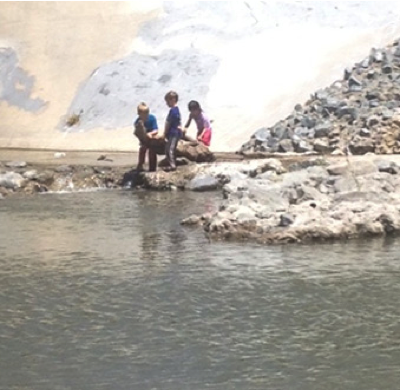 We went in a caravan to Fremont and eventually found our way and each other at this charming park nestled in the foothills. We were greeted by a Blue-Bellied lizard that posed for us before running off. Seagulls flew by overhead and hawks careened over our heads over the duration of the trip. We also smelled Penny Royal, a plant that has a lovely fragrance and pretty purple flowers.

They climbed and ran for a bit and then we headed off to the creek. I was fascinated with how the children each navigated their way down to the edge of where they could go with safety and how much risk they took at the beginning and then at the end. The children each met their goals of how far they were going to go into the water and we had to drag most of them out after over an hour and a half when they started to shiver. They warmed themselves like our lizard friend on the rocks and were ready for a fresh fruit and nut snack. The children for all their differences clearly feel like a group and though they often forget or are too tired to remember that others are depending on them, they rose many times to the occasion, sharing and taking turns and helping get another’s shoe, for example as it started to float down the river. 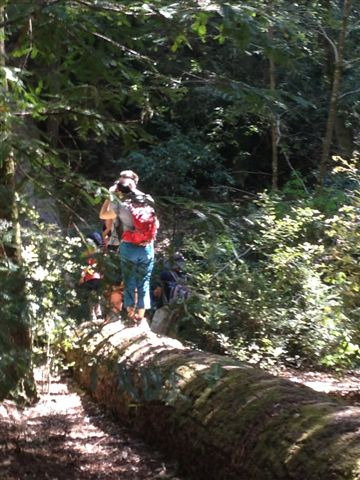 Big Basin is California’s oldest State Park, which we entered via a beautiful canopied road that left us 2000 feet above sea level! We got to meet face to face the Sequoia family members that are among the oldest and tallest trees on the earth. We had a wonderful time getting to know our new friends and families. We ate lunch inside an ancient redwood, which could have been 2000 years old!

We learned about the amazing survival mechanisms of the trees, and took a nice walk to a creek, where we discovered salamanders and centipedes. We even saw Yerba Buena, the herb that San Francisco was named after.  We took our time reflecting on the quiet of the woods, the beauty of the wild irises and the meadow that we passed by which reminded me of Peter and the Wolf. We made a drum circle at the end, back in the redwood fairy circle of trees, and got to hear what everyone enjoyed from the visit. Clearly everyone got something different and meaningful out of the experience, from knowing it was ok to have a meltdown once in a while, to discovering how much fun it is to explore nature with peers and how old and sacred the plants and trees are that surround us every day. 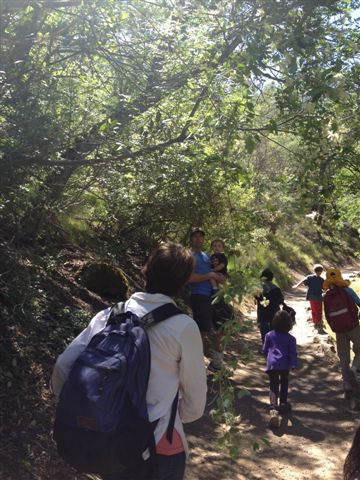 What a stunning sight Pinnacles is for those, like myself, who have never been deep enough inside the park to appreciate its beauty. I had no idea what laid beyond that dry summer meadow. It’s truly magical and though not a completely unique phenomenon, unique enough to be recently deemed a National Park and photogenic enough to command a lot of attention to its colors, forms and surprising niches. Little waterfalls (or as Devin said, “water fountains”) peek out from the crevasses and streams of light peek into the caves that engaged the children enough to distract them from the multitude of steps they had to climb to maneuver through them. Our adventures included lunch, exploring caves, seeing dragonflies (including one molting!), vultures, ducks and more! We also learned about how the caves were formed as a volcano.

Chaia, This is just such a wonderful in-depth narrative of what happened on the trip. It’s so great to hear about all of the details, I can’t thank you enough. You are truly a one of a kind teacher. We are so glad to have found you! – Cynthia (Devin’s mom) 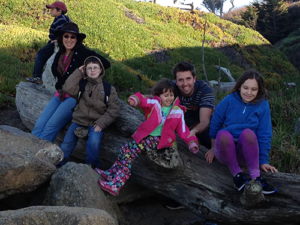 We had perfect weather for our group, with a sun dappled ocean view all day long and the perfect temperature and breeze for eating lunch out by the marsh, visiting the town of Pescadero and rock hopping at the Fitzgerald Marine tide pools.

Nate was as resourceful as always, a bottomless pit of information on fascinating topics such as the kinds of fish that live and travel to and from the marshes and tide pools. Elijah was our official reporter, taking notes for his family’s newspaper and promising he would send us a copy.

Our first set of plans seemed to morph with the emergent events of the day rather than go as planned, as Nate found nature that was fascinating in the most hidden and surprising of places including a rose bush growing in front of the Pescadero church with the sweetest rose hips we’d ever tasted. Other activities included tasting local snacks (fish, wild horseradish, blueberry honey), learning about the filtration system of salt-water plants, viewing wild strawberries and succulents growing on sand dunes, inspecting tidepools, and observing seals and wild hawks.

At Stanford University, we learned about the history of the amphitheater, visited the statue garden, and climbed to the top of Hoover Tower for an incredible view of the Bay Area from San Francisco to the rolling hills of Palo Alto in their greenest finery. We met visitors from around the world, and climbed on more modern sculptures, some generated by mathematic formulas, some inspired by pure beauty. At the museum, we chilled out over a fascinating video on music and creativity collected from excerpts of Hollywood and ethnic film clips and a chocolate fest of hot chocolate and brownies to restore our souls. 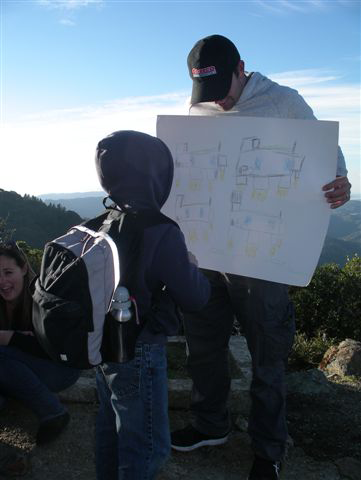 This is an excellent observation point of the San Francisco Bay. From atop the summit, we viewed the present condition of the bay, discussed the current events that are taking place (infrastructure, vessel freight, Carquinez straights, and significance of the Delta region, South Bay/Silicon Valley, East Bay, North Bay wetlands, and overall climate and geography). By viewing and discussing these things, we gained a better understanding as to how and why San Francisco Bay has become one of the world’s best places to live. We had a group exercise that challenged the kids to act as if they are the first settlers in the area. As a team, we made a list of all the things necessary to make the Bay Area what it is today. Once we felt content with our list, we made another list of things that can be added to the Bay Area to make it a better place.

At Natural Bridges, we discovered the incredible Monarch Butterfly and its arduous annual migration. We explored why Monarchs call this place its winter home and how such a small creature can make such a large journey. We also had a group activity to name as many animals as possible that have migration patterns, and also discuss why these migrations are necessary. Natural Bridges also has tide pools and arches at the oceans edge. This is a great segue into the power of the surf zone (which will be discussed in detail in the following field trip). We mainly focused on understanding how soil type, ocean conditions, tides, and erosion all intertwine to create the various strattaforms at the waters edge (tide pools and arches). At Seamore Marine Discovery center, we saw a 90ft Blue Whale skeleton, explored touch tanks filled with, rays, sharks, and other sea creatures, and saw ongoing science research with a docent. We discussed how animals can become so large in an aquatic habitat. We learned that rays and sharks are very ancient creatures, whose skeletons are made of cartilage. The underwater world was displayed up close for them to discover. 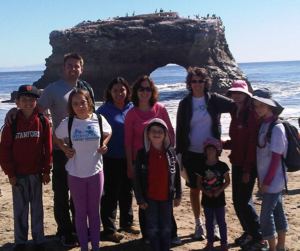 Fitzgerald State Beach holds some of the Pacific’s most prized tide pools. These little gems rank very high in biodiversity. Together, we explored these vibrant communities, teeming with all forms of life, keeping a list as we go. We also discovered how difficult it is for anything to survive in this small zone that separates above group from the underwater world. We recorded in detail the various types of adaptations these living things (algae, fish, shellfish, arthropods,etc.) use in order to survive in this harsh world.

Wiggles and Tunes and Stories Too!

Classes are all $20 or contact me for a scholarship.
First class drop in and you can pay monthly.
Venmo: @CHAIAMAY@CHAIA-MAY

If the weather is bad, classes will be canceled.

We comply with the COVID-19 guidelines as given by the CDC so masks will be worn at all times. If possible, please bring your own instrument.